After the signing of the Armistice on November 11, 1918, many of the former battlefields of Europe were recreated as memorials in commemoration of those who served and died during the war. Battlefields in France and Belgium, such as the Somme, Verdun, and Ypres were all seen as key locations of war efforts, and as such were turned into commemorative spaces for soldiers and their heroic actions. The Island of Ireland Peace Park in Flanders, Belgium, constructed near the battlefield of Messines Ridge and commemorating the union of two Irish divisions that would later come to symbolize the divide in Ireland, is just one of the many war memorials in Europe dedicated to the soldiers who died, were wounded, or are missing from the First World War.[1]

Irish Round Tower on Island of Ireland Peace Park

Local communities and towns within these countries also built their own memorials to the war and the fallen in homes, churches, and other public spaces. Irish who had served in the war or who were sympathetic to war efforts visited these public sites to pay their respects to the fallen soldiers and to keep the memory of the war alive in the hearts and minds of themselves and the Irish citizenry. Through these homage trips, the Irish contributed their own piece to the environmental memory of the Great War. Within Ireland however, competing narratives over the memory of the war and the role of Irish soldiers in the conflict complicated a central celebration and commemoration of Ireland’s contributions and sacrifices.

The Irish National War Memorial Gardens in Islandbridge, Dublin commemorates the memory of “the 49,400 Irish soldiers who gave their lives in the Great War.”[2]  Much discussion hindered the initial construction of this memorial, which did not see official completion until 1938.[3] During the 1940s and 50s this memorial saw commemorations of fallen war veterans but also became a site for Irish Republican paramilitary attacks. On two separate occasions in the late 1950s, paramilitary forces attempted to blow up the War Stone and memorial cross, however failing both times to do any severe damage.[4] In contrast to the Irish National War Memorial Gardens, the Garden of Remembrance in Dublin is dedicated to the memory of “all those who gave their lives in the cause of Irish Freedom.”[5] This site commemorates several rebellions that place it in stark conflict with the Irish National War Memorial Gardens, including the 1916 Easter Rising and the Irish War of Independence. This memorial was constructed on a sacred spot to the rebels, as it was on this spot that leaders of the 1916 Rising were held overnight before being imprisoned.[6] This memorial opened in 1966, the fiftieth anniversary of the Easter Rising, and was opened by none other than the president of the time Eamon de Valera, a man who had been crucial to the Rising and the Irish independence movement. 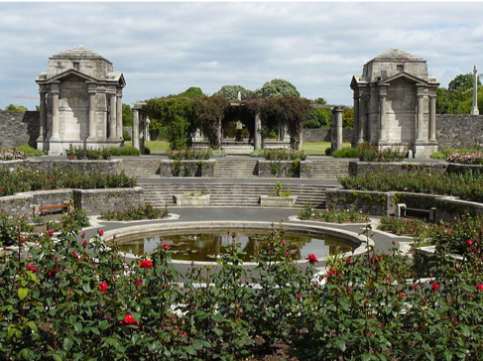 The construction of these two memorials in Dublin tell two different narratives about sacrifice and life during and after the First World War. The Irish National War Memorial Gardens in Islandbridge, Dublin tells the story of sacrifice and bravery as Irish soldiers gave their lives in loyalty to Britain and its control of Ireland during the conflict. The Garden of Remembrance in Parnell Square in Dublin tells a story of sacrifice and bravery for the rebel forces who repeatedly fought for Home Rule and Irish independence. This narrative plays down or even attacks the contributions of Irish soldiers who participated in the conflict, as well as the families at home in Ireland who supported the war through services and supplies. 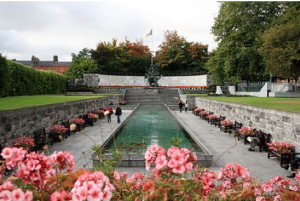 This inability to reconcile a national narrative for the people of Ireland’s role and contributions in the war-time period do not mirror other national commemoration efforts seen in Britain, France, and Belgium which saw unity and cohesiveness in the construction of national war memorials and other commemorative structures and proper homage paid to those who had sacrificed during the war.